What does a super-obese model on the October cover of Cosmopolitan UK magazine tell us? That we shall embrace different forms of beauty? That obesity is not an issue as long as it is embraced? Or a very misleading message for women? Probably a bit of everything…

Whatever someone choses “to be” (to wear, to eat, to look like…) is an individual choice and can therefore not be criticized. Whether one embraces heavy overweight consciously or through repressing emotional issues, in any case, it cannot really be an issue of discussion! Neither can be the question which body type is appropriate to be presented in swimwear. “Good” or “bad”, “good taste” or “awful” are labels that are always based on one’s personal moral (and/or predominated moral we might adhere to). So, there is no comment for me to make regarding the model’s decision to pose for the cover. 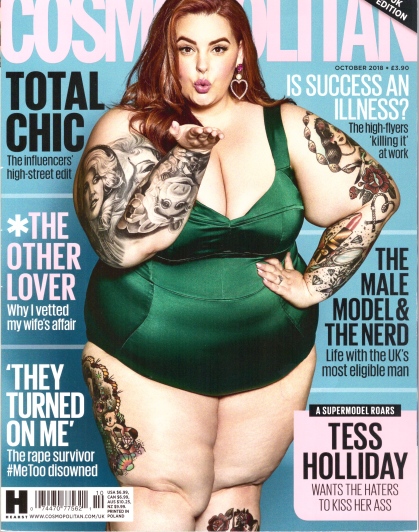 I have an entirely different – and major – issue, however, which is the Cosmopolitan team’s decision to feature the model in a lengthy article without any single reference to matter of super obesity. Super obesity is a serious illness with immediate and long-term health issues! A photo of a woman beautifully styled, lit and retouched must not make forget that. Super obesity is hardly ever due to genetic malfunctioning, but to lifestyle choices (nutrition, exercise, emotional and mental balance…) hence the person has the power to challenge it. And, super obesity is directly related to numerous and severe other health concerns (diabetes, heart diseases…).

Celebrating “a different kind of beauty” (whatever that means, anyway) might be tempting for selling magazines – and why not? However, I am very critical of Cosmopolitan’s lack of discernment and responsibility vis-à-vis their readers by not including a discussion of serious problems related to morbid obesity! There is a big risk of reader perceiving obesity “a non-issue, really” – which is certainly very far from facts. By the way, isn’t it fairly hypocritical that the magazine only and exclusively features skinny and very fit women on every other page of the same edition?

Hence, what responsibility do the media have today? What kind of media do we want?

©The Vibrant Factory
About Stefan Lehner: Executive coach, Life coach, as well as nutrition coach & educator based in Paris, available worldwide. He previously worked in management in an international corporation. He loves to explore with the client his or her emotions, thoughts and limiting belief patterns, in order to shift towards a renewed outlook and jeopardizing his or her old certitudes. His credo in all coaching situations is empowerment and taking responsibility: become responsible for one owns choices, desires and acts. His book on nutritional transformation (in French) will be published in March 2019. He is currently working on a future book on liberation from emotional suffering.
http://www.thevibrantfactory.com, on Facebook and Instagram

1 thought on “DOES COSMOPOLITAN PROMOTE SUPER-OBESITY?”